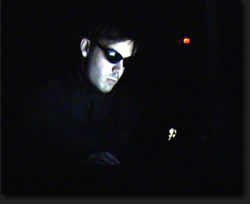 Ondamendia (?catastrophe? in Basque) is a recent work by the multidisciplinary
artist Oier Etxeberria questioning the general health of Basque culture. Ondamendia
is a collection of parodies of Basque iconic images in the
format of postcards accompanied by a 20 minute-long 3? CD of concrète music called
C14. The name is taken from Carbono 14, a radioactive isotope of carbon which is
used to measure the age of an object in archaeological
research. The title is an ironic reference to the ancestry of Basque Culture
(Euskara the Basque language is the oldest living language in Europe). C14 combines
fragments of typical Basque folk sounds made by Txistularis
(flute players), Bertsolaris (poetry improvisers) and some classic songwriters from
the Basque Country such as Mikel Laboa and Benito Lertxundi. These fragments are
sometimes processed and mixed with other sounds more
related to contemporary life such as advertisements and cash machines.
Running alongside this is an underlying narrative of an autopsy performed on a body.
?It seems dead,? you hear the doctors comment, ?but sometimes it seems to
re-animate.? According to Etxeberria, this pseudo-zombie is a
metaphor for the actual status of Basque culture. In an informal conversation at the
end of last year he commented :
?Because the Basque culture is such a minority, it really needs to rely strongly on
itself?. ?Unfortunately this means that it often lacks criticism.? As many readers
will be aware the Basque Country has particular
sociopolitical problems coming from the impossibility of being able to decide
whether or not to be a sovereign nation due to it's bureaucratic location in the
north of Spain and the south of France.
These problems are often misused by the media to serve the agenda of different
political parties. Musicians in this part of the world are therefore understandably
reluctant to be part of over-simplified modes of
representation. At the governmental institutions run by the
PNV (the Basque Nationalist Party which has been in power for the last 25 years),
the purity of the Basque folk tradition and its historical construction remains
unquestioned. However, works such as C14 bring new
possibilities of dealing with one?s own heritage. Humour, imagination and conceptual
rigour makes this work an interesting platform for discussion about the notion of
Basqueness.

This summer in 2006, a meeting called MRB | AMM was organised in Arteleku by
Audiolab and myself where people involved with experimental music had the
opportunity to spend three days talking about what we are doing and how
it relates to such a specific context. Among many discussions, the one about the
problems of generating a scene stood out: how to avoid generalisations,
simplifications and the dichotomy of who is in and who is out. This is
something that we really know in the Basque Country as one is often forced to define
oneself either as Basque or Spanish. Contrary to this, if there is something
characteristic about the musicians now working in the Basque
Country, it is their diversity. The variety of approaches, from Alex Mendizabal?s
constant questioning of what music is and Arakis? personal questioning of gender
(apart from making electronic music, s/he is
an international renowned curator dealing with issues of feminism and queer theory),
to the industrial and dark soundscapes of Tzesne and his young and very enthusiastic
friend Tüsüri (who, apart from being a musician runs
the Webzine Sototik, a radio programme and a Net label) is mind blowing. Other
examples of the Basque multitude are Pilar Baizan, characterised by her double life
as Miss Toll (Electroclash) and Baseline (old school power
electronics), the classically-trained cellist Maite Arroitajauregi, ?el palo? (?the
stick?) player Iñigo Telletxea, Löty Negarti and his pranks and anti-virtuosism
(Negarti also runs Hamaika, the most refreshing noise and
improv label that I have encounter recently), the broken glamour of Baba Llaga, and
the surprising re-birth of Cancer Moon singer Josetxo Anitua as the beast of
improvisation in Josetxo Grieta.

It is not by chance that so many musicians are emerging from the Basque Country
right now. For several years a handful of committed people have worked hard to
develop a fertile ground for experimentation. Xabier Erkizia of
Audiolab is not only one of the most talented musicians that I have ever met, but
also an activator, someone who is constantly injecting questions and developing
projects where the participants have to take an active role.
At San Sebastian?s Arteleku, a contemporary art centre, he has developed Audiolab, a
laboratory for the development of experimental music. Audiolab organises workshops,
talks, presentations and concerts as well as other
activities. It is also a studio where people are welcome to explore the universe of
sound. Another project that Erkizia is part of, together with Dimitris Kariofilis,
is [UN]COMMON SOUNDS, a theoretical and practical
research into the international experimental music community. Kariofilis has also
recently released a CD of tracks by young Basque artists on his label Antifrost.

The Ertz collective was founded by Erkizia in the year 2000, and has organised a
festival in the small but beautiful town of Bera for the last seven years. Thanks to
Ertz and the Musica Ex Machina festival in Bilbao, people
have been able to see performances by many of the interesting international artists
working right now. While Ertz is mainly concerned with sound art, the MEM festival
is trying to bring back the image of Bilbao as an
industrial city in cultural terms, focussing on the rougher side of things
presenting international noise artists alongside emerging local talent. MEM has
helped to make the city's underground culture more dynamic through
organising noise concerts in different venues such as a sixth-floor metal workshop
in the neighbourhood of San Francisco and at Bilborock, a church dedicated to the
preaching of Rock and Roll. Another interesting place is
the Matadero of Azkoitia, a squatted ex-slaughter house that has been organising
concerts for many years. This is also the territory of the legendary cult band
Akauzazte, an obsessed, dense and obscure experimental rock band
singing in Basque who on a good day can beat any other such act, even though they
are not so well known outside the Basque Country. Furthermore, Akauzazte, Tzesne and
the Ertz collective have just started a new DIY
distributor and Net based shop called Arto Artian, where you will be able to find
the works from many of these talented and challenging artists. So even if former
Akauzazte member Oier Etxeberria thinks that Basque culture
needs some serious revitalisation, it seems obvious
to me that it is already getting some potent electric shocks in the form of
experimental music.

Ondamendia and many works by the mentioned artist are available at www.artoartian.org/

Its astounding, seeking in the time and work you place into your weblog and detailed specifics you furnish. I'll bookmark your web site and pay a visit to it weekly for the new posts.
http://www.nikesneakersuk.com/